What is the Kitchen Triangle and How Does it Work?

What is the Kitchen Triangle and How Does it Work?

The typical kitchen is rectangular or square in shape with the cabinetry and other installed appliances lined up against the walls, having a clear space in the center. In the Island design, there is a workstation in the center of the kitchen. Whatever the shape and layout of the kitchen, the work ‘triangle’ is the biggest factor in its functionality.

As such, the NKBA has given guidelines on designing a triangle that promotes maximum efficiency in the kitchen:

This designing for efficiency means that all major workstations are near the cook while giving him or her ample space to work. This design also ensures that the cook is not interrupted by people crossing paths. The triangle is applicable in almost any regularly shaped kitchen with a sink, refrigerator and a cooktop even in U-shaped kitchens.

There are some limitations with the work triangle. For one, it assumes that only 1 person will be in the kitchen. Second, it assumes that there are only three workstations in every kitchen. While this is mostly true in small households, this changes in large dwellings and commercial kitchens.

It is not uncommon to find family members sharing kitchen duties, or some working while others idle around socializing. Kitchens have also become larger to accommodate different styles like the large kitchen style or large U-shape style kitchens.

While one cannot ignore the triangle when designing a small kitchen, designers say that it is advisable to consider the total picture rather than confining the design to the demands of the triangle. It shouldn’t be forced on the design. Different principles of ergonomics can be applied where the triangle is not applicable.

Meet with a Designer
Showroom Hours

Monday-Friday: 9 am to 5 pm Saturday: By appointment only Sunday: Closed 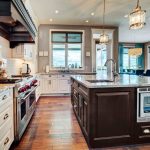 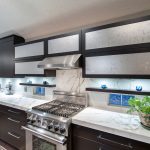